The LEGIPID 1-hour Legionella sp. test is one of the more than 140 different paramter-methods on the PrimeLab 2.0

Legionella bacteria, in special Legionella pneumorphila serogroup 1, is a harmful threat with a mortality rate up to 30%. Once Legionella is inhaled (droplets in the air), they grow in human lungs and can cause Pontiac fever or even Pneumonia (Legionnaire's disease).

The issue with current method (culture) is that it takes up to 14 days to let Legionella grow on a petri dish to be viable and countable, which is far too long to take effective actions. Legipid® on PrimeLab takes a different approach: As with the culture method 1 litre of water is filtered to catch the Legionella. After releasing Legionella from a filter, a patented reagent is added which contains micro-bits with magnetic core, covered with an antibody.

Due to the antibodies, only living Legionella Sp. (no false positives!) are captured. After several steps, a colour tracer, again connected to an antibody, is added to connect with Legionella Sp., already linked to the micro-bit. This results in viable Legionella being made visible (pink colour) to be read by PrimeLab.

PrimeLab detects colour and translates it into the range: 60 - 10^6 cfu. 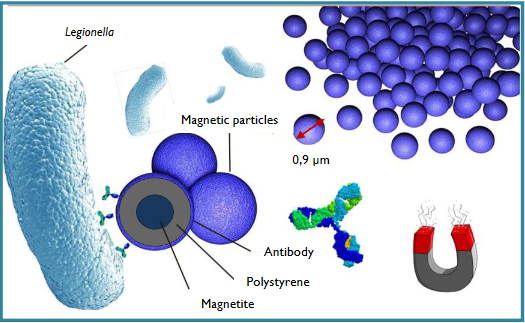